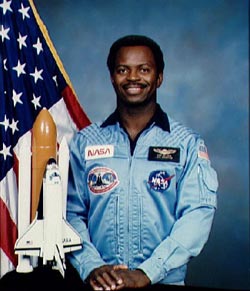 Dr. McNair became a nationally recognized expert in laser physics while on the staff of Hughes Research Laboratory and received many honorary degrees, fellowships and commendations. His achievements were not limited to academia. He was a fifth-degree black belt in karate and was an accomplished saxophonist.

In 1978, Dr. McNair was selected for participation in NASA’s space shuttle program and became the second African American astronaut in U.S. history. He served as a mission specialist aboard the space shuttle Challenger and died along with the rest of its crew when the space shuttle exploded nine miles above the Atlantic on January 28, 1986.

Click on image for link to Ronald McNair StoryCorps video